This blog is slowly turning into “thanks for the jolly good time at yet another affiliate event” blog 😉 But before I return to posting some actual content that doesnâ€™t involve drinks I simply couldnâ€™t allow one of the best networking and down right fun events this year to pass without gettingÂ the mention it deserved.

This time the good, bad and ugly (you know who you are) made their way to Plymouth for the Existem AM Summer BBQ. The venue was booked from 7pm to very late (think it was 3am in the end) and they even had Plymouth’s finest wedding DJ on hand to spin the tunes, when we were all sober we mocked his cheesy choice in songs but believe me at 12pm the mockery was no more as the dance floor was full of the worst dancing and singing you could imagine for a bunch of drunken Affiliate Marketing people, I would like to go into more detail but my mind is a haze. I am sure Lee McCoy was doing the best â€œdad dancingâ€ moves, not bad for a non-dad 😉 and I do believe there was a dance off at one point, personally I canâ€™t remember it as I was having one of those out of body experiences where I was seeing some crazy fool who looked like me busting the floor up with wild moves as he was throwing shapes (mostly squares) all over the placeâ€¦ free life lesson â€œdonâ€™t drink cider and move to JD and cokesâ€!! 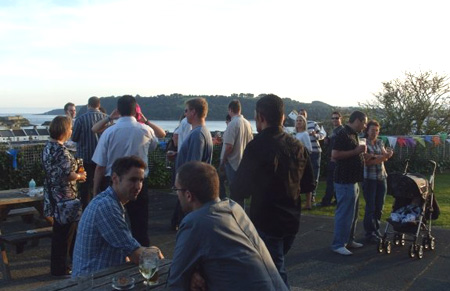 The raffle in aid of local RNLI (Royal National Lifeboat Institution) was run with style by Hannah who shared the microphone with local celebrity and Plymouth Argyle Midfielder Jamie Mackie and my understanding is it raised a tidy little sum, hopefully Hannah will comment on this blog post to let us know how much in the end, and cheers to everyone who donated prizes, everything from a packet of Skips to a 2 night mini cruise to Amsterdam for 2 people. 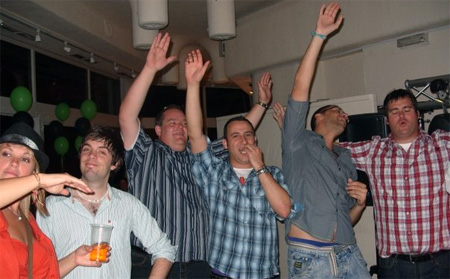 Fun aside some business was done mostly before and during the actual BBQ feast, I say a feast as it wasnâ€™t some crappy burger and that was that, no it was burgers, steaks, chunky bits of chicken on sticks, sausages and for the vegetarians (what you doing at a BBQ anyway) it looked like someone brought a garden along, but I avoided that area due to suffering from Lachanophobia (I donâ€™t really have a fear of vegetables). 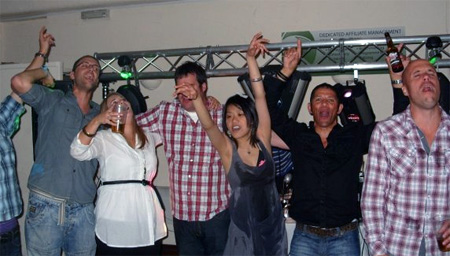 What I find interesting about these events is that you find out new stuff from people you haveÂ known for ages, indeed I may be sorting out a partnership for one of my Affiliate sites due to the event, time will tell how profitable or not that may be but still the point is thatâ€™s a bit of business that I probably wouldnâ€™t have thought about if I had not got talking to a few of the old hands that turn up from time to time.

So all in all a great eveningÂ thanks to Mark, Bruce and Hannah from Existem AM who made it all possible. You guys ran a fine event, it was busy and the stagesÂ the event ran through worked really well I felt, well worth the trip from Glasgow, Stuart and Jonathan from Paid On Results who made the journey with me had a great time also.

I hear Mark has booked up next year as this one was such a success, so pencil in pen in Friday 20th August 2010 for the next Existem AM Summer BBQ and donâ€™t miss out this time.