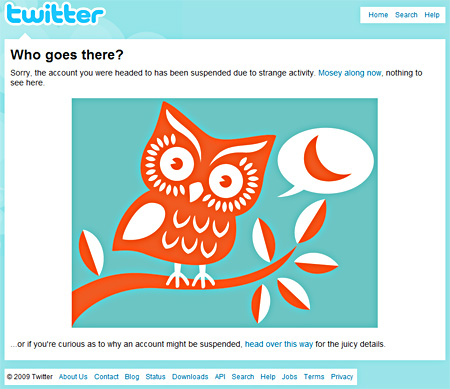 I was like, ah ok I have to been hacked unless itâ€™s breaking Twitter rules to talk to your friends or do business like arrange what hotel you be staying at for the up and coming a4u Bristol Road show.

I decided to jump over to the Paid On Results account and itâ€™s suspended also, I am like no way, people complain we donâ€™t send enough messages and last tweet was about our new rebranding, the other week. At this point I am in a panic, hundreds of friends and customers will be thinking I am a low down dirty spammer, so I get in to my account to send a support request to Twitter, here is what your account looks like whenÂ  they suspended you.

I send in a support request and automatically get, ticket closed with “problem solved”, only the problem has not been solved my accounts have been suspended, so I write again to ask why and start searching to see if anyone else was having the same problem.Â  I do http://search.twitter.com/search?q=suspended and find only a couple of people suspended, well of course if your suspended you canâ€™t post so some smart cookies have made new accounts to tell their friends they are innocent and not dirty spammers. As I look for news, nothing official can be found, I start checking friends accounts, all are ok, so what is going on, why am I and why is Paid On Results suspended?

Well turns out an hour later thousands of people have been suspended, and that was demonstrated by the sheer volume of people who wrote about â€œsuspendedâ€ in a tweet, only get this Twitter must be blocking certain keywords from trending and while â€œsuspendedâ€ was racking up a tweet every few seconds it never once showed on the top trending topics, where is Freedom of Tweet?

So can you trust Twitter for Business? Well sadly if you are building up a following or brand or even a business via Twitter for a error of this scale to happen it really dents trust in the system and would really effect goodwill with your users, how many people have un-followed or not followed people they where going to follow who have suspended accounts, your going to think â€œno smoke without fireâ€ well I can tell you right now I trust smoke signals to get my messages out a hell of a lot more than Twitter.

Official statement from Twitter here, oh and the human whoâ€™s error it was, good luck finding as new job!